Getting into VFX might not seem possible to everyone out there. But there are people like Raghav Anil Kumar, the man behind the popular YouTube Channel – Shutter Authority. He focuses on teaching millions of subscribers how to create world-class VFX [...]

Raghav Anil Kumar, a well-known filmmaker-cum-VFX artist who has worked with brands like Google, Electronic Arts, Nvidia, LG, and so many more on a professional level. 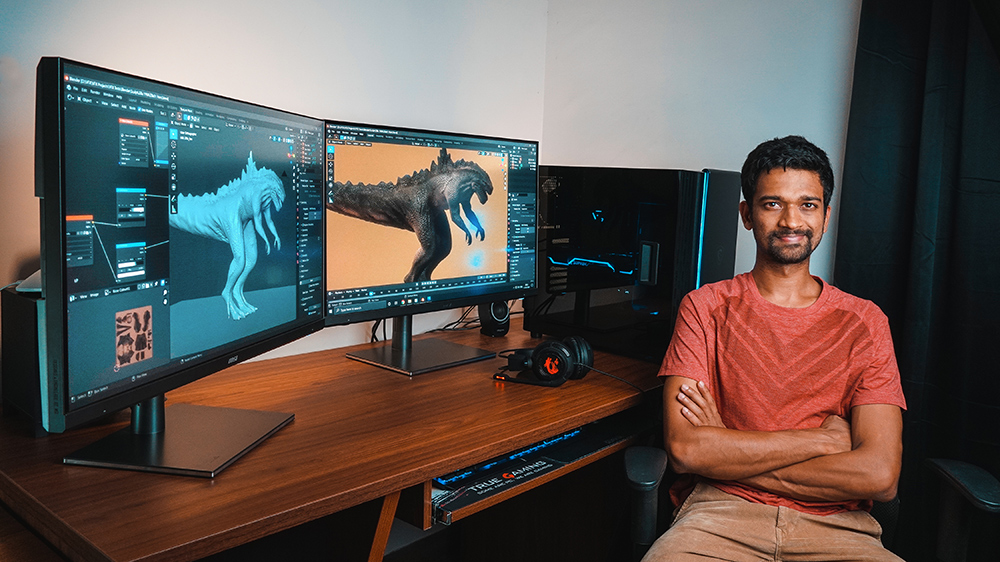 Raghav in His Natural Habitat

Today, he’s a filmmaker-cum-VFX artist with over a decade of experience producing high-quality video content for social media channels under the name ‘Shutter Authority.’ His channel has an audience of well over 3 million subscribers and he regularly collaborates with brands, famous singers, and actors on VFX projects.

The Journey Begins… With MS Paint

While most kids spend considerable time watching movies, only some express a genuine interest in the creation process. Raghav was one of them. “Thankfully, the timing was perfect,” he quips, “because I was able to play with that stuff right at home!” Although his early attempts to recreate cool movie effects turned out crude, he still found it fun and rewarding.

“It was really thrilling for me to recreate cool movie effects!”

As a kid, Raghav made drawings and crude animations using MS Paint on his dad’s Windows 95 PC. Interest in video editing came later when Raghav started experimenting with it on a Pentium 4 system. He quickly adds, “it used to be unbelievably slow!”

Raghav discovered VideoCopilot back in 2008 – a website that hosted detailed VFX tutorials for After Effects. It was the knowledge gained there that helped him develop a solid foundation in animation and VFX. Now, after over a decade in the field, he’s a well-known VFX artist who has worked with brands like Google, Electronic Arts, Nvidia, LG, and so many more on a professional level.

A Desire to Learn

“Identify what interests you the most and research how you can learn more about it,” says Raghav. That’s his advice for anyone looking to get started in not just the VFX industry, but in any creative field out there. The availability of quality training material online, often for free, is a Godsend for those who genuinely want to learn.

In addition to quality tutorials, Raghav also emphasizes the fact that both software and hardware are so much more accessible now. “Amazing software like Blender and DaVinci Resolve are free to use,” he exclaims, “and powerful computers are getting very affordable.”

“It’s never been this easy to get into VFX!”

He truly believes that if someone’s willing to invest time to learn and experiment with VFX, it’s easy to start making inroads into this industry.

Raghav’s primary focus today is his YouTube channel – Shutter Authority. He also collaborates with brands on exciting, and often cutting-edge VFX projects, “this forces me to keep learning new things,” he finishes.

A new project begins with writing a screenplay and developing a storyboard. Raghav adds, “we also make live action previews for better visualizations sometimes.” Next comes the camera work. Raghav’s toolkit for videos includes a Sony A6500 mirrorless camera, a Zhiyun Crane 3-Axis Gimbal or a Manfrotto tripod (depending on the project), DJI drones, and sliders.

Most action shots require the help of a Rokoko Motion Capture Suit – allowing Shutter Authority to produce animated characters much faster. Once all the video footage is ready, they’re sorted and a rough timeline is created in post. “I use Davinci Resolve for this, says Raghav. 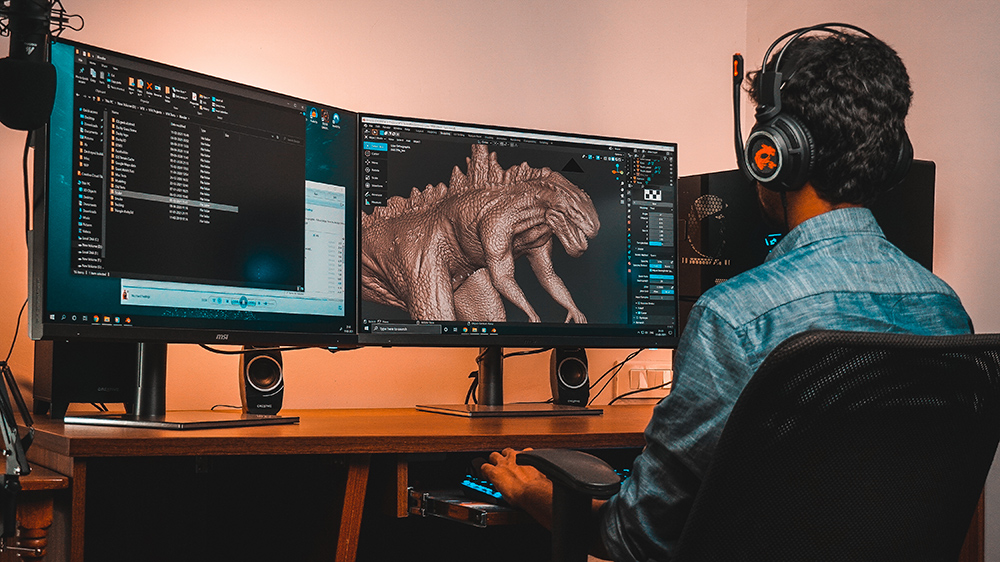 All VFX shots are motion/camera tracked in After Effects and the backgrounds are then exported to Blender. That’s where all the 3D work happens – a task requiring both precision and attention to detail.

Blender allows users to easily model/sculpt and texture 3D assets. These assets are then rigged with virtual bones of sorts (armatures) – an essential step in the animation process. Now, the models are ready to be animated. 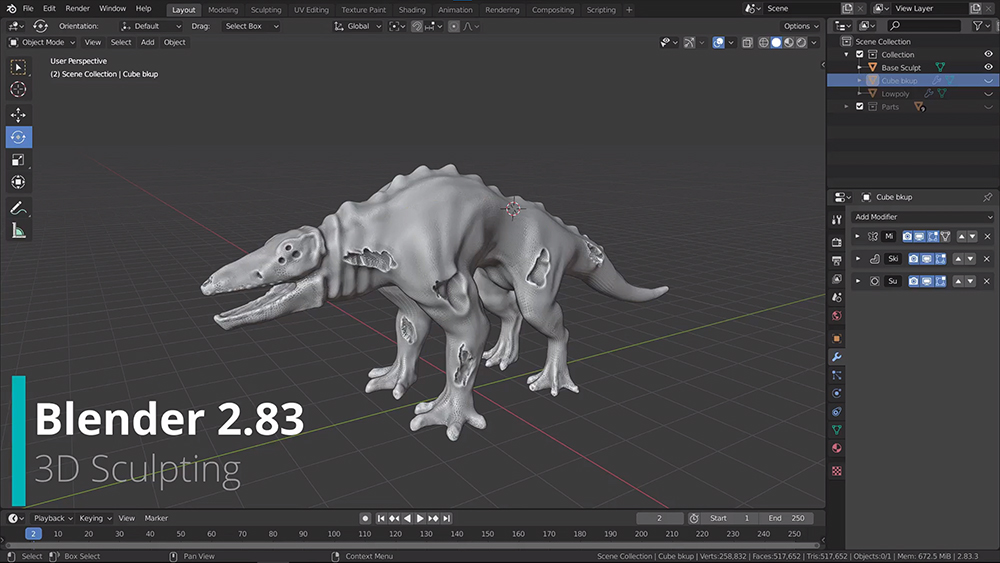 Sculpting and Modelling with Blender

The animations can be done either manually (a longer process) or with the help of a motion capture suit. “It depends on the requirements of a scene,” explains Raghav. For a scene that needs more realism and traditional humanoid movements, motion capture (mocap) is a faster, more accurate way to go about animating a model. However, there are times when you’ll want to create an animation from scratch. For example, when you want to deviate from realism and get more creative with a character.

Raghav continues, “the next step is to light the scene and render CGI passes.” The rendered CG layers are all then composited in After Effects over the live-action plates – integrating it to make it seamless. 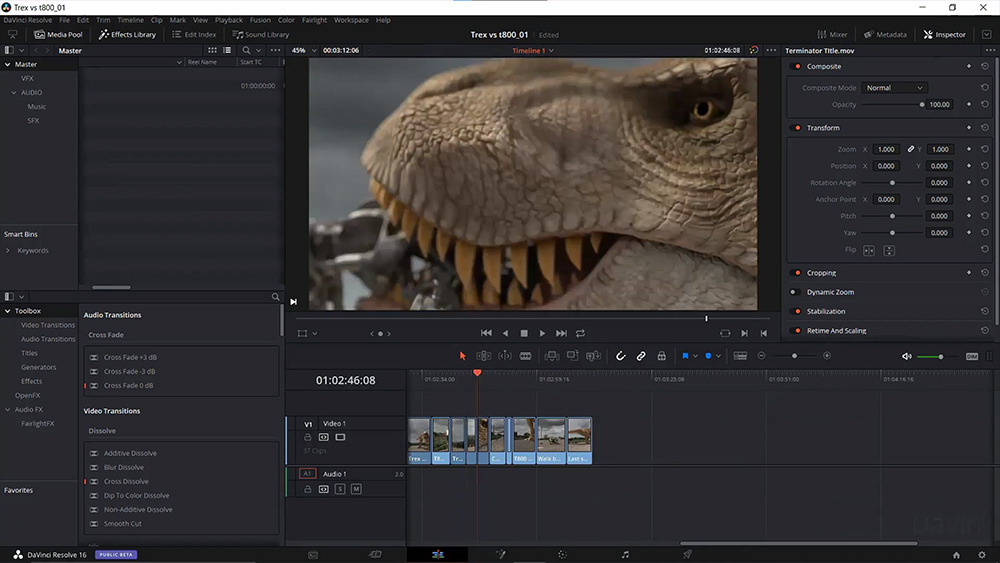 On to DaVinci Resolve

The final composition is then rendered and exported to Davinci Resolve to go through the final edit, color grading, and sound mixing. Quite a day.

Coming from trying to edit videos on a Pentium 4 machine, Raghav is one of those people who truly appreciates the amount of computing power at our fingertips today.

“Right now seems like the golden age of digital storytelling thanks to the amazing software and hardware we have today!”

The processing power needed from both a compute and graphics standpoint to handle a professional VFX workflow is mind-boggling. Juggling Blender, Adobe After Effects, EmberGen, and Davinci Resolve, to create a polished piece of work is no mean feat. “I’m always on the lookout for something that will significantly improve my VFX workflow,” says Raghav. 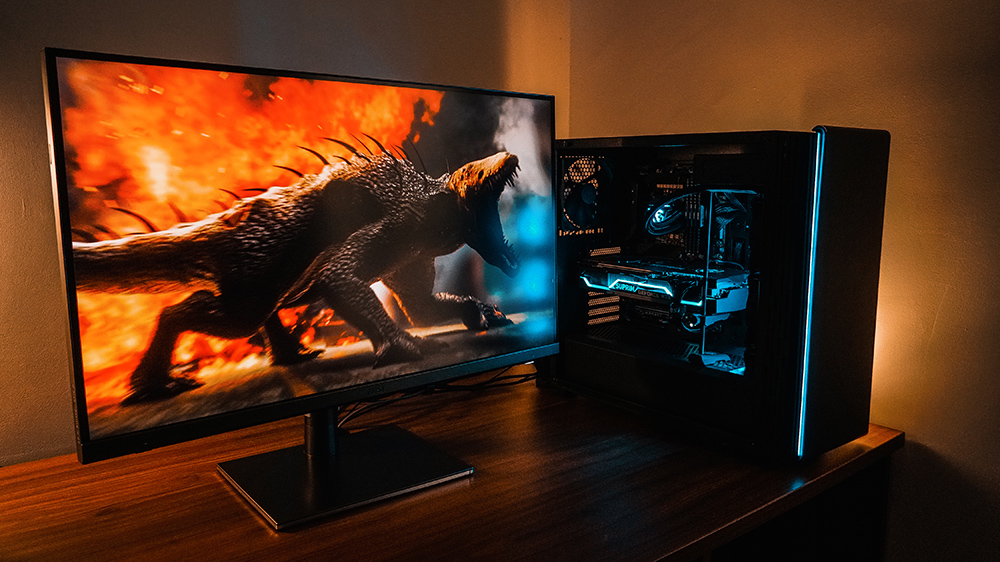 When it comes to computer hardware, Raghav’s used it all. From Intel’s early Pentium CPUs to AMD Radeon 5000 graphics, he’s seen a marked improvement to his workflow with each passing year.

When working with slower hardware, professionals like Raghav have to deal with issues like a lack of responsiveness and protracted project timelines.

“Earlier, making even a basic low-poly character would take several days, and animating it felt like a huge accomplishment.”

Working on a powerful PC that houses parts specifically designed to handle high-performance workloads like VFX and CG is a dream come true. “It’s been an absolute pleasure working on a PC built around the MSI MEG Z490 Unify motherboard and an MSI RTX 3090 SUPRIM X 24G graphics card,” exclaims Raghav. 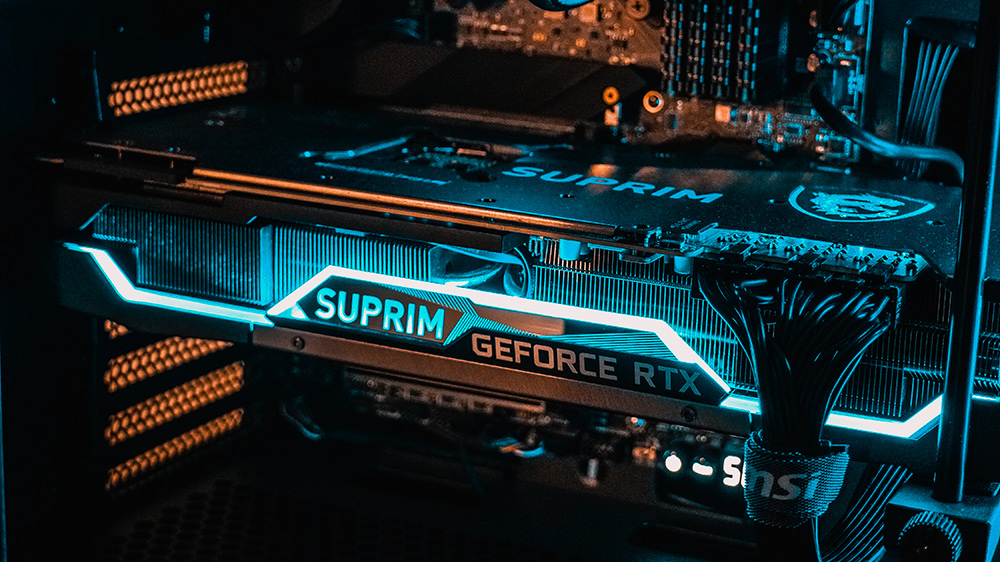 Looks, Performance, and Only Whispers... It's Got It All.

“It’s handled everything I’ve thrown at it quite easily.”

While the motherboard offers excellent upgrade potential thanks to its extensibility, “the graphics card is the real beast,” he grins. When it comes to rendering on 3D software in his workflow, it’s over 2 times faster than the Titan RTX he was using just over a year ago! Not only does this allow him to render animations in half the time, but he can also opt to render at a higher quality.

Raghav believes we’re heading towards GPU-accelerated workloads for almost every kind of task in his workflow – making the GPU one of the most important parts you can buy for a VFX workstation.

“Everything is significantly faster – allowing me to focus more on the art rather than trying to optimize and tinkering with render settings all the time.”

The MSI RTX 3090 SUPRIM X features one of the most robust cooling solutions of all time – allowing for whisper-quiet operation even when powering through heavy loads. “I love this graphics card,” says Raghav, adding, “even when I’m rendering a heavy 3D scene, it stays really quiet!” With a mere 31 dBA noise level (that’s the decibel level of a quiet whisper) on load, it’s no surprise that Raghav can immediately notice the near silence.

Performance doesn’t have to look ugly, and Raghav wholeheartedly agrees. The gorgeous design of the graphics card helps make his behind-the-scenes videos much more tasteful. “The polygonal shapes with the brushed metal finish really makes it look like a product from the future,” he says. It truly stands out and demands attention. It looks ‘super-cool.’ His words.

As far as the Eyes Can See – Monitors, HDR, and More

For professionals like Raghav who will always need more than one application running at the same time, dual monitors are a Godsend. “One large monitor would still make it hard to keep all the open windows organized,” he explains, “it’s really important to have enough display real-estate to manage all applications more effectively.” 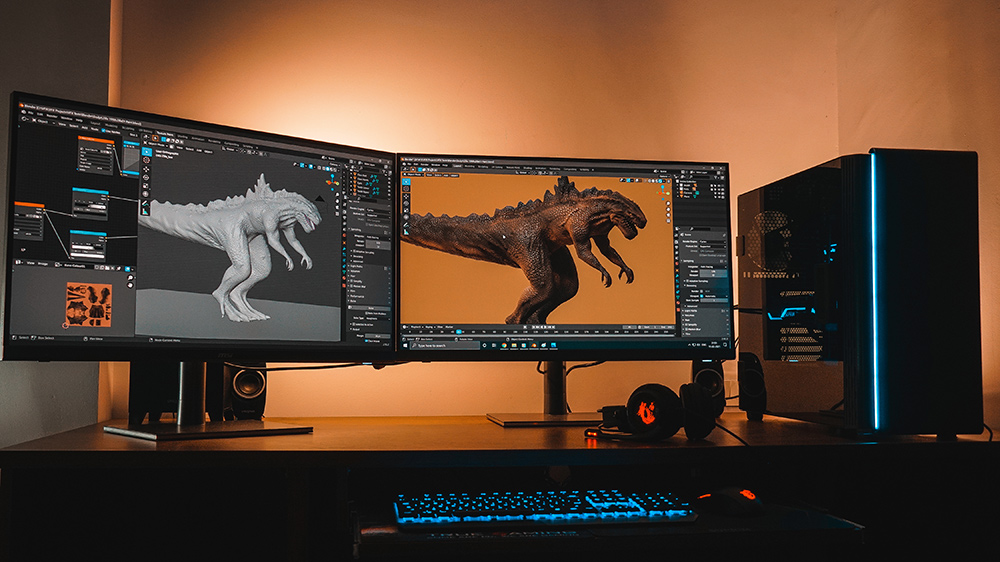 So Much More Space for Multiple Applications

Another crucial factor when picking a monitor for professional use is its color accuracy. “The color precision on the MSI Creator PS321QR Monitor was excellent,” Raghav says. He also appreciates the fact that there’s a ton of control given to professionals – exactly what’s needed for a professional color-grading monitor. “This is especially true when working with HDR imagery,” he adds, “since HDR imagery holds a lot of detail in the brightest and darkest area of the image.”

A large 32-inch screen along with the 1440p resolution of the monitor allows Raghav to use and manage his software UIs more easily – further speeding up his workflow.

“It’s beautiful and I love it! The lighting on the back is gorgeous too.”

When we’re talking about the looks and design for professional hardware, it should either slip into your workspace quietly or stand out and draw attention. For Raghav, the 32” Creator PS321QR Monitor offered the latter. “The metallic look makes it look very premium and I love how grand it looks in my workspace,” he says.

For Raghav, it’s all about looking ahead and wondering what’s next. He loves the progress PC hardware has made over his time in the VFX industry. “It allowed indie creators to do so much more, things that weren’t previously possible,” he says, “I’m excited to see where technology takes us!” The rapid progress in graphics and compute is a boon for creators like Raghav. It means more time creating, and less time cutting corners or waiting. 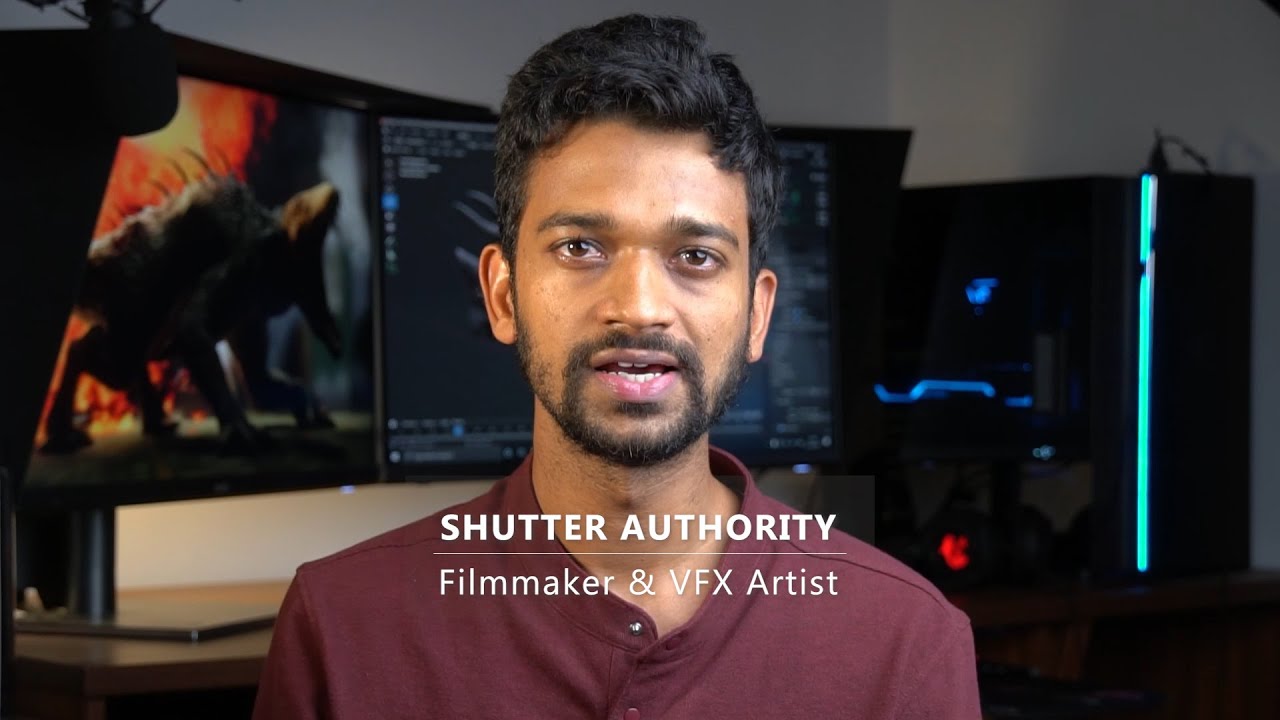 Jama is a freelance concept artist/art director working in the film industry. He graduated as an aerospace engineer in the mid 2000s, but made a career shift to chase his dream of becoming a concept artist. Jama has worked on movies such as “Star Wars”, “Avengers: Age of Ultron”, “Aladdin”, and many others.